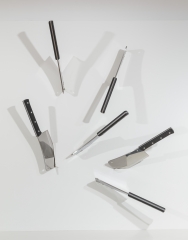 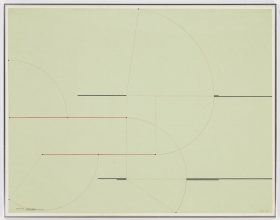 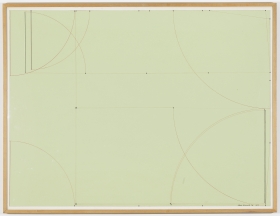 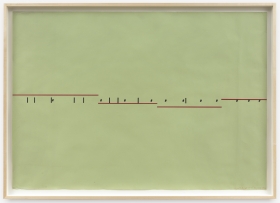 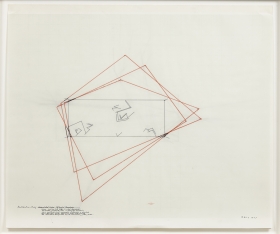 David Nolan Gallery is delighted to inaugurate its new Upper East Side location with a solo exhibition of historical works by Barry Le Va.

Widely recognized as a leading figure of Postminimalism alongside peers Bruce Nauman, Dorothea Rockburne, Richard Serra, and Robert Smithson, among others, Barry Le Va’s influential and elusive practice emerged in the mid-to-late 1960’s in stark contrast to the monolithic, geometrically rigid, and stagnant sculpture of the time, instead championed transience and impermanence, and favored soft, humble materials, twisted and clustered, and deeply invested in physics, psychology, and architecture.

Le Va’s sculptural works are generally the result of an active process of distributing, spilling, scattering, blowing, layering, dropping, and throwing. The distribution of materials allows them to unfold in situ, in sequence and in relation to other conditions, over time. Le Va’s dispersals ultimately push the notion of sculpture to its formal limits: "To eliminate sculpture as a finished, totally resolved object. To eliminate a sense of wholeness and concentrate on parts, fragments, incomplete activities and structures. To emphasize transitional stages of an activity or many activities with no foreseen end…I had to eliminate a contained mass – expand it, extend it…Real time, real space, real locations, real reasons.”

Sheets to Strips (1968/2020), on view in the main gallery, is installed for the first time since Le Va’s Minneapolis studio in 1968. Like much of his felt floor works of the 1960s, it is a study of contrast and tension, of its relationship to architecture and the viewer. With the materials placed, thrown and dropped, the viewer is seemingly left with the ”residue” of a private performance, and often left to mentally reconstruct the sequence of the event. While formally expressionistic and seemingly random, Le Va’s floor sculptures of the 1960’s are in fact incredibly precise and installed with immense compositional control.

In 1969 Le Va began to experiment with meat cleavers as tangible media in his work. These pieces were performative in the same way as the felt pieces (and to a greater extent, his shattered glass works), with the cleavers either thrown or hacked into the wall and/or floor. Le Va’s gesture and composition functioned as a choreographed extension of the body in space, marking movement with intent and grace.

Emblematic of Le Va’s installations of the late 1960’s, the meat cleaver works were iconoclastic for their aggressive materiality and enigmatic elegance. They are undeniably a product of their time, of great political upheaval and global unrest, with Le Va acting as the involuntary conduit of these external stimuli.

Alongside Untitled (Cleavers), the gallery also presents a suite of works on green paper from the mid-1970’s. Admired for their visual clarity and architectural structure, this grouping encompasses some of Le Va’s most lyrical and performative works on paper. Related mainly to Le Va’s Walking Stick installations of 1972-73, the drawings mark the lengths between points in space. By using a walking stick to mark movement through time and space, Le Va (and in turn the viewer) could then reconstruct the movement by retracing the events backwards in time. Much like the 60’s works, these works highlight the relational nature of Le Va’s work: “If there is any point of view in the work as a whole,” says Le Va, “its relational. To change one thing is to change the whole thing.”

Barry Le Va was born in Long Beach, California, in 1941. Following his first solo exhibition in 1969 at the Walker Art Center, Minneapolis, his work was included in landmark presentations including Anti-Illusion: Procedures/Materials in 1969 at the Whitney Museum of American Art and Information in 1970 at the Museum of Modern Art. Le Va has also participated in Documenta (1972, 1977, and 1982) and the Whitney Annual and Biennial exhibitions (1971, 1977, and 1995). Major surveys of his work have taken place at the New Museum, New York (1979); Carnegie Mellon Art Gallery, Pittsburgh (1988), (which traveled to Orange County Museum of Art, Newport Beach, 1989; High Museum of Art, Atlanta, 1989; Neuberger Museum of Art, New York 1990); Institute of Contemporary Art, Philadelphia (2005); and Serralves Museum, Porto, Portugal (2006). In the last decade, Le Va’s work has been included in important exhibitions at Museum für Moderne Kunst Frankfurt (2020); MoMA PS1, New York (2015–16); Yale University School of Art (2015); Dallas Museum of Art (2015); Castello di Rivoli Museum of Contemporary Art, Italy (2011); and Peggy Guggenheim Collection, Venice, Italy (2011), among others. Le Va is currently the subject of a retrospective at Dia: Beacon (2019-ongoing).

Barry Le Va
Back To Top