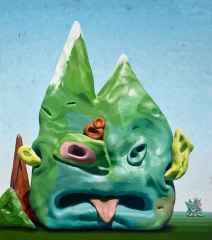 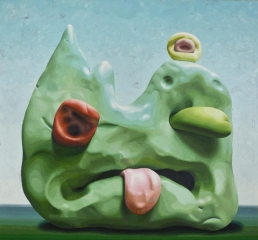 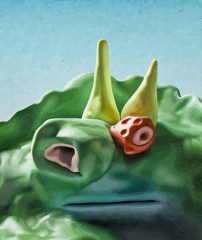 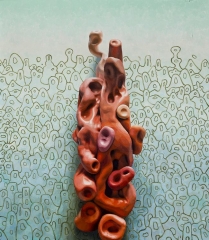 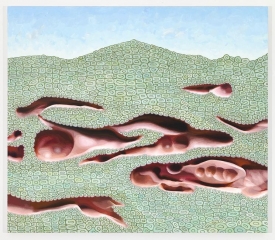 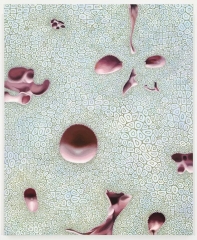 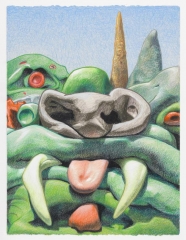 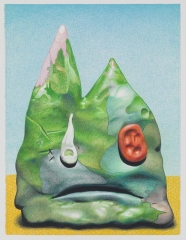 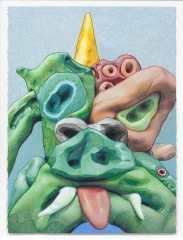 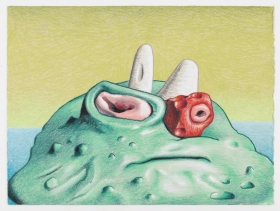 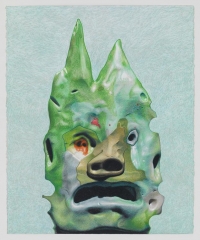 David Nolan Gallery is pleased to present Recent Terrestrials, an exhibition of new work by Alexander Ross. On view from October 30 through December 6, this will be Ross’s third solo show with the gallery. Bringing together a series of large-scale paintings and group of smaller drawings, the exhibition signifies a variety of recent formal and thematic innovations for the artist.

Ross is best known for his biomorphic imagery, wherein modeled forms suggest molecular ecosystems as viewed through a microscope, or surreal landscapes inspired by Max Ernst. In recent years, the artist has developed a distinctive color palette in which occasional flashes of red and yellow emerge within multiple shades of green. Ross’s characteristic handling of paint – through which shapes are given dimensionality in incremental bands of shading – might suggest a photorealistic endeavor. However, viewed as a whole, his compositions can be understood more accurately as abstractions, in which the interplay of color and form, highlight and shadow become the focus.

With Recent Terrestrials, Ross redirects his emphasis toward imagery recalling “grotesques”, a style of architectural ornament found throughout Europe that incorporates ugly or playfully contorted faces. These sneering faces also have a political dimension, conveying the artist’s restlessness in response to what he perceives to be disquieting geological and social changes in civil life.

Another group of paintings finds the artist un-mounted from his established vantage point, in which a clear blue sky serves as a neutral backdrop. Radically shifting this familiar perspective, a number of Ross’s new works comprise intricately worked lattices or cellular matrixes, which appear both luminous and translucent. In an alternative reading, these can also be seen as cross-sections of the earth where unusual concave forms suggest subterranean excavations.

Born 1960 in Denver, Colorado, Alexander Ross lives and works in Great Barrington, Massachusetts. His works are included in the permanent collections of the Museum of Modern Art, New York, the Denver Art Museum, the Art Institute of Chicago, the Morgan Library, New York, and the Herbert F. Johnson Museum of Art at Cornell University, Ithaca. He is the recipient of numerous awards including the John Simon Guggenheim Memorial Foundation Fellowship (2002) and the Louis Comfort Tiffany Foundation Award (2003). His works have been exhibited in museums and galleries worldwide since the mid 1990s, including the pivotal group show Remote Viewing at the Whitney Museum of American Art (2005). Ross is currently included in Spaced Out: Migration into the Interior, a group exhibition at Red Bull Studios, New York, curated by Phong Bui. 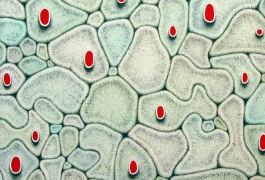 Alexander Ross
Back To Top