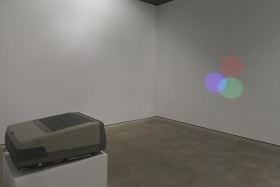 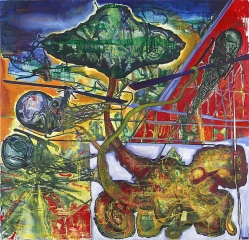 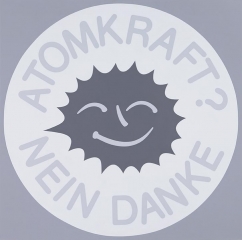 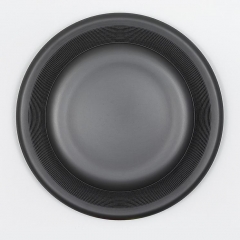 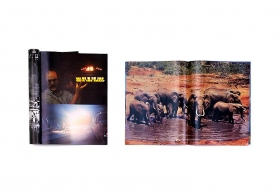 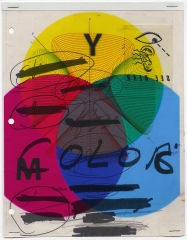 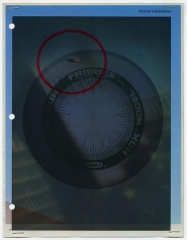 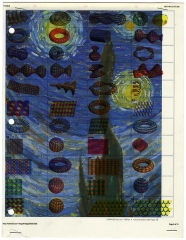 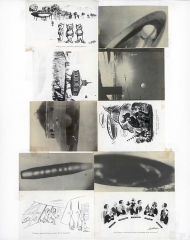 Occupying the rear and mezzanine galleries, an exhibition entitled About UFOs brings together the work of five artists who form an engagement with the phenomenon of the “unidentified flying object.” In 1946 the American inventor, Arthur M. Young, developed his first ideas for the pioneering “psychopter,” which was conceived as a metaphor for the human spirit. Young’s radical questioning of our position within the universe serves as a starting point for the enigmatic works in this exhibition.

A recent piece by Richard Prince (b. 1940) – a large inkjet on canvas – combines an array of American cartoon imagery with a group of sepia-hued images of flying saucers, while a painting by Steve DiBenedetto (b. 1958) imagines the extraterrestrial within a giddying and hyperactive composition. Peter Coffin’s (b. 1972) addition to this exhibition is a CRT projector that beams three circles of colored light that glide along the wall. As the Red, Green and Blue discs overlap, they produce new colors that are only possible through combining light, referring back to Isaac Newton’s theories on color. Three works by Terry Winters (b. 1949), which are in part a product of the artist’s research studies, present scientific and otherworldly imagery, beguiling and perplexing in equal measure. Adam McEwen’s (b. 1965) circular monochrome object poses questions about our perception of reality, using the material properties of graphite to displace that which is commonplace and familiar. Also presented is one of McEwen’s Atomkraft paintings.

Arthur M. Young sought to integrate human thought and experience with the realm of science. Similarly, this exhibition presents challenging questions about our universe, as we bravely tackle the unknown.